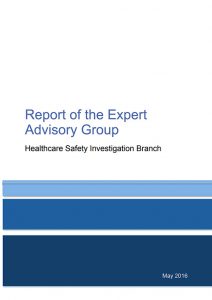 The Government have published the Expert Advisory Group report which recommends how the new “Healthcare Safety Investigation Branch” in NHS England should be established.

You’ll be aware that the CHFG have campaigned for many years for a robust independent investigation body to mirror similar organisations in other safety critical industries.  Last year the Government committed (with much effort behind the scenes from our supporters) to develop such an organisation  The EAG report, informed by many of our supporters, sets out how such a body should work in healthcare.

From my point of view there are three key themes:

Full independence was strongly supported by a CHFG survey that many of you completed last autumn, the survey results were personally presented to the Secretary of State for Health by me and other colleagues.  At this stage the Government have developed a hybrid model which, the Secretary of State has agreed with me and colleagues should be reviewed in 2 years.   I would continue to support the need for full independence.

Recommendation 2 has already been accepted by the Government in response to the earlier report by the Public Administration and Constitutional Affairs Committee.  I should like to take this opportunity to acknowledge the leadership of Bernard Jenkin MP in getting to this stage.

The CHFG have always believed a legal “safe space” is necessary to support learning and it’s the one big thing missing from existing investigations in healthcare.  The Secretary of State has already agreed to develop legislation providing a safe space and it would appear, at this stage, that the actual application of it, will be left with the Chief Investigator as the final arbiter of what is shared with patients and what remains inadmissible.  We believe this is the correct approach and would like to see a situation where the Chief Investigator uses the EAG recommendations as a guiding principle.

I’d like to finish recognising that the EAG members’ and the Governments’ overall support for the principle of high quality safety investigations is really welcomed.  To develop such a body is a watershed and I’d like to thank the Secretary of State for Health for doing this.  I’m of course also delighted that Human Factors and System Safety is at the core of the report, but when you look at the list of supporters involved you’d expect nothing less.