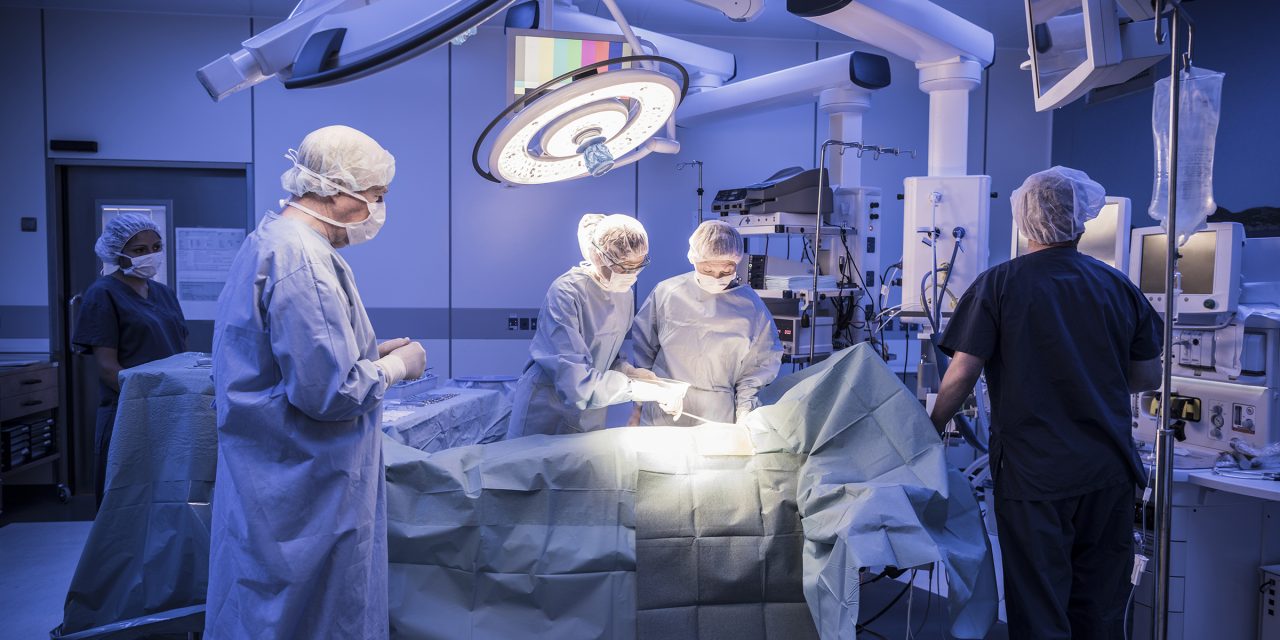 Rebus Medical spoke to Consultant Anaesthetist Professor Chris Frerk about his interest in Human Factors, its patient safety benefits and the power it may have to influence procurement decisions.

Chris Frerk is a Consultant Anaesthetist and Chair of the Medical Equipment Committee at Northampton General Hospital, which is responsible for procuring around two million pounds worth of medical equipment for the hospital every year.

Why the interest in Human Factors?

Many of you will be familiar with the tragic story of Elaine Bromiley who died in 2005. Her death was the result of unexpected complications that arose during what was meant to be a routine sinus operation. Elaine’s husband, Martin Bromiley, a commercial airline pilot, subsequently set up the Clinical Human Factors Group (CHFG) to help understand what went wrong and how events of this nature can be avoided in the future. It was Elaine’s story that inspired Professor Frerk to get in touch with Martin.

“When Elaine died, I was the chairman of the Difficult Airway Society,” explained Chris, “I just thought that it was awful when I read about it and I rang Martin up. When he was putting together the Clinical Human Factors group, he invited me to the launch event and I met lots of other interested healthcare workers that he’d assembled, as well as ergonomists and psychologists. I stuck with the CHFG and found Human Factors really interesting, so I read more about it, did a bit of an MSc module at Cranfield and attended other human factors conferences just to try and broaden my knowledge. And now I use that knowledge to talk about it at conferences.”

How is Human Factors currently incorporated into the NHS?

“Individuals who’ve got an interest, and there are quite a few of us, with varying levels of training, are doing the bit they feel they can get done in their hospital, what they can fit into their spare time.” Chris told me, “Some people will run courses, some will try and get themselves onto investigation panels, whatever sparks their interest. And then they’ll try and convert the cohort. But there is no strategy for it.”

How do you incorporate human factors into your day-to-day work?

Chris explained to me that there is an obvious focus on technical skills training for healthcare professionals but every day he sees a requirement for what he terms non-technical skills. For example, how should workers communicate with a colleague who is task-fixated and lost in their work? Chris incorporates this into his general daily training and also runs human factors awareness workshops whenever he can.

Embedding the non-technical skills like communication and workload planning in to everyday healthcare thinking is one of Chris’ goals. He hopes that we can reach a point in healthcare where it’s no longer even thought about and is just ingrained into processes.

“I’ve got a fairly good concept of where we are in the NHS. Ergonomists that I speak to tell me where we should be – like other industries with good human factors adoption. But we can’t go straight from where we are now to where we want to be. I don’t know what are the most effective first steps to take. I’m trying to work with ergonomists to understand how industries like rail, aviation and offshore got there. I feel that the regulations in those industries are much more streamlined than in the NHS. We are working with the regulators but it’s a huge task.”

One example Chris described was that of organising surgery operating lists. From a human factors point of view, it makes sense to separate children and adults, who have different risk profiles, onto distinct operating lists allowing staff to focus on the same set of safety considerations throughout a day. He explains that whilst this is very beneficial from a patient safety perspective sometimes it has to be overruled to meet NHS waiting list guidelines.

How much device specific training is necessary in your hospital?

Chris told me he’s very keen on improving the design of products, systems and processes. Such improvements can reduce the need for repeat training. Products often require a technical skill to be used properly and this skill not only needs to be learnt but also practiced and perfected. Chris explained that when devices are not regularly used this is when some mistakes occur but keeping up competency on devices that are infrequently used is a challenge. It’s these devices that need to be as intuitive as possible. Currently just having the right kit isn’t enough; how to use it needs to be practised.

“When there’s a problem, the manufacturers always say that more training is required. For example, we had a number of incidents with one product and reported it. The response from the manufacturer was ‘it quite clearly states in the manual that training is required’. They want to protect themselves because this is a problem across the country. They won’t acknowledge that there’s a problem because the deaths that have happened would be attributable directly to their design.” Chris continued, “The manufacturers will say that the machine was working as it was designed to do. It wasn’t a fault with the machine, it was a training issue.”

In general, how fit for purpose are the devices you use regularly?

“Increasingly, medical equipment is quite complex. There can be lots of hidden menus so it’s possible to do the same task in lots of different ways. The company will say ‘we’ve done this because everyone’s got their own way of doing it and you can customise it how you like’. When I ask ‘What’s the safest way?’ they often don’t have an answer.”

Chris admits however that he notices bad design because of his interest in human factors. He often sees his colleagues simply adapt their working patterns to cope with poor design. Where he can he will help by, for example, moving the room around so it suits a human as best as possible.

“When I’ve identified particular things that I know cause trouble I go to the manufactures and ask them: ‘Have you got this machine but with this extra feature?’. Usually they haven’t. For example, we have integrated workstations with the equipment and monitor all built-in and the machines that we bought have the screen on the left. This means that in some theatres you can see everything you need but a theatre with a mirror-image layout the monitor is behind you. I asked if we could have half with monitors on the left and half on the right and the manufactures just told me that we need to design our theatres so the screen is always in a good position.”

Chris lamented that, whilst the product might have been developed with a good human-centred design process, the context of use had not been fully explored.

“It can depend what hospital you walk into, there can be a human-centred design process for the equipment but the process by which it’s used is very complex and it doesn’t work. One hospital might prefer a small device because they can store it where they use it, whereas with a bigger one they can’t.”

How important is evidence of usability testing to you?

“For me it’s proved very difficult to get any information about HFE assessments; the companies don’t seem to provide it or come up with any evidence that they’ve even done any.” Chris went on to explain, “Occasionally I’ve managed to get an ergonomist to come and look at something.

“One year we were planning to replace our ageing stock of a particular medical device which was widely used throughout our hospital. Four companies were shortlisted to the final tendering process in competition for more than a million pounds worth of business. We organised an independent usability assessment of the four companies’ devices with three months of testing of software and human machine interactions to tell us which devices met most standards and which ones were likely to incur errors under certain circumstances. Our procurement team agreed that we should add this information into our existing decision making process. Interestingly three of the four companies were happy to have their equipment assessed in this way and be used as part of the procurement process, but one suggested they would take legal action against us if we tried to do so.

“If just one company, making a medical device, would really engage with human factors professionals early then that company could then say ‘this has been designed in collaboration with ergonomists, it’s had usability testing’. I would then go and buy that device and I would stand up in conferences and say ‘buy this one’. I’m probably an early adopter but I feel like the cohort would be close behind me. It sounds like this might be happening but we don’t know which products have been assessed and which haven’t”.

We discussed the benefits he sees to the provision of evidence that a device is user friendly. He suggests that, when selecting a car, buyers might consider the NCAP safety rating. Similarly, he would certainly welcome a usability rating. How did the product score? What are the areas of strength and where are the weaknesses? What mitigations are in place? Chris firmly believes that purchasing professionals could and should have access to that information to help choose a product.

Can there be a rating of how good the usability is? In the medical device world, do we focus too much on what’s needed to meet the regulatory requirements, aiming to clear the bar that they set? And although obviously the FDA and their regulatory kin have high standards, wouldn’t it be great if the testing led to a usability grade? Usability can drive so much more than safety; reduced training needs and costs, increased efficiency leading to shorter surgical times and improved patient recovery, as well as improved desirability increasing brand loyalty. Imagine the marketing power of a positive usability rating on the latest patch pump or syringe driver and the confidence that would give purchasers and end-users alike. And yet, for now at least, manufactures seem to show little interest in sharing usability results.

I’d like to thank Professor Frerk for his time and providing me with such fascinating insights. Chris will be presenting on ‘How usability can be used to procure better design’ at the CHFG Safer Healthcare by Design conference on the 12th June 2019 click here to register.